I recently got my self and Galaxy S3 for testing out Replicant, an android image made out of only open source components.

It is well supported in Replicant, almost every driver is already open source. The hardware specs are acceptable, 1.4Ghz quad core, 1GB ram, microsd, and all the peripheral chips one expects for a phone. Galaxy S3 has sold insanely (50 million units supposedly), meaning I won't run out of accessories and aftermarket spare parts any time soon. The massive installed base also means a huge potential user community. S3 is still available as new, with two years of warranty.

While the S3 is still available new, it is safe to assume production is ending already - 1.5 year old product is ancient history in mobile world! It remains to be seen how much the massive user base will defend against the obsolescence. Upstream kernel support for "old" cpu is open question, replicant is still basing kernel on vendor kernel. Bootloader is unlocked, but it can't be changed due to trusted^Wtreacherous computing, preventing things like boot from sd card. Finally, not everything is open source, the GPU (mali) driver while being reverse engineered, is taking it's time - and the GPS hasn't been reversed yet.

Before install, from the original installation, you might want to take a copy of firmware files (since replicant won't provide them). enable developer mode on the S3 and: After then, just follow official replicant install guide for S3. If you don't mind closed source firmwares, post-install you need to push the firmware files back: Here was my first catch, the wifi firmwares from jelly bean based image were not compatible with older ICS based replicant. 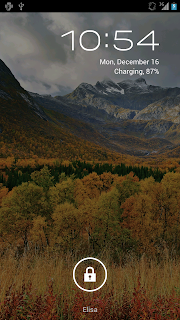 Booting to replicant is fast, few seconds to the pin screen. You are treated with the standard android lockscreen, usual slide/pin/pattern options are available. Basic functions like phone, sms and web browsing have icons from the homescreen and work without a hitch. Likewise camera seems to work, really the only smartphone feature missing is GPS. Sidenote - this image looks a LOT better on the S3 than on my thinkpad. No wonder people are flocking to phones and tablets when laptop makers use such crappy components. 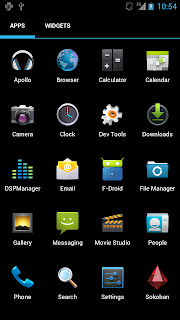 The grid menu has the standard android AOSP opensource applications in the ICS style menu with the extra of f-droid icon - which is the installer for open source applications. F-droid is it's own project that complements replicant project by maintaining a catalog of Free Software. 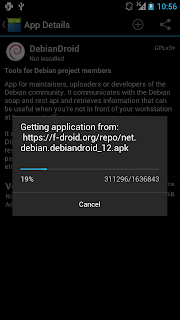 F-droid brings hundreds of open source applications not only for replicant, but for any other android users, including platforms with android compatibility, such as Jolla's Sailfish OS. Of course f-droid client is open source, like the f-droid server (in Debian too). F-droid server is not just repository management, it can take care of building and deploying android apps. 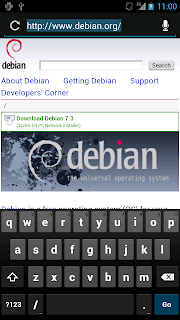 The WebKit based android browser renders web sites without issues, and if you are not happy with, you can download Firefox from f-droid. Many websites will notice you are mobile, and provide mobile web sites, which is sometimes good and sometimes annoying. Worse, some pages detect you are android and only offer you to load their closed android app for viewing the page. OTOH I am already viewing their closed source website, so using closed source app to view it isn't much worse. This keyboard is again the android standard one, but for most unixy people the hacker's keyboard with arrow buttons and ctrl/alt will probably be the one you want.

While using replicant has been very smooth, the lack of GPS is becoming a deal-breaker. I could just copy the gpsd from cyanogen, like some have done, but it kind of beats the purpose of having replicant on the phone. So it might be that I move back to cyanogen, unless I find time to help reverse engineering the BCM4751 GPS.
Posted by Riku Voipio at 22:41 No comments:

ACPI on ARM storm in teacup

A recent google+ post by Jon Masters caused some stormy and some less stormy responses.

A lot of BIOS/UEFI/ACPI hate comes X86, where ACPI is used from everything from suspending devices to reading buttons and setting leds. So when X86 kernel suspends, it does magic calls to ACPI and prays that the firmware vendor did not screw it up. Now vendors do screw up, hence lots of cursing and ugly workarounds in the kernel follows. My Lenovo has a firwmare bug where the FN-buttons and Fan stops working if the laptop is attached on AC adapter for too long. The fan is probably a simple i2c device the kernel could control directly without jumping through ACPI hiding layer hoops. But the X86 people hold the view it is better to trust the firmware engineer to control devices instead of having the kernel folk to write device drivers to ... control devices!

Now on ARM(64) the idea of using ACPI is to have none of that.

Instead the idea is to use ACPI only to provide tables for enumerating what devices are available in the platform. Just like what device tree does. Now if this is the same as device tree, why bother?

The main reason is to allow the distribution installer behave same on X86 / ARM / ARM64. This is crucial for distributions like fedora and RHEL where a cabal holds the point of view that X86 distribution development must not be constrained by ARM support. But it also important for everyone that the method of installing your favorite distribution to an ARM64 server is standard and works the same for any server from any vendor. Now while UEFI and ACPI are definitely not my preferred solutions, I can accept them as necessary evil for having a more standard platform.

On behalf of aarch64 porters

When porting GNU/Linux applications to a new architecture, such as 64-Bit ARM, one gets familiar with the following error message:

This in itself is trivial to fix - run autoreconf or just copy in new versions of config.sub and config.guess. However, when bootstrapping a distribution of 12000+ packages, this becomes quickly tiresome. Thus we have a small request:

If you are an upstream of a software that uses autoconf - Please run autoreconf against autotools-dev 20120210.1 or later, and make a release of your software.

Aarch64 porters will be grateful as updated software trickles down to distributions.

This was the most discussed point during my FOSDEM talk "Porting applications to 64-Bit ARM".