After a brief look at the market, I decided to keep using my sturdy X40. Looking at what could be done to improve the 4 years old workhorse, three things came to mind: 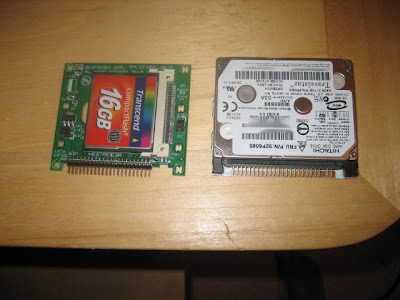 The only one worth detailing is the hard drive upgrade, since I decided to go SSD. less moving parts, less heat, less power consumption. I followed the Thinkwiki CompactFlash boot howto. This basically involves getting a CF-IDE adapter (from ebay, around $5) and any CF card. The first CF-IDE adapter $2.99, but it didn't work. After some research it was concluded that the SMT soldering was bad. The second adapter bought worked fine, and as a bonus the dimensions match the X40 HD perfecty:

In order to minimize writing to flash:

Generally I'm very happy with the results of the upgrade. X40 is now most of the time completly silent, without the spinning and clicking HD. Fan turns on less often than previously. The cheapo compactflash is fast enough on reading, and the REALLY slow write speed is usually not a problem thanks to the loads of RAM. Ofcourse, the exception is when a application uses fsync() ... which leads to.

FIREFOX SUCKS GOAT BALLS WHEN RAN FROM A SLOW SSD

Seriously. It's like watching snail cross a tarpit. That's what happens when you fsync() a 30MB places.sqlite on a 6MB/s write speed flash media every fucking time a page has finished loading (and seeming every now and then too). Now here's a really simple workaround: make ~/.mozilla tmpfs and rsync it to/from a backup dir every time you log in/out.


It does what mozilla should be doing in the first place - write to temporary files when running and on exit synchronize to the real database and fsync(). With this hack, suddenly the web browser UI doesn't freeze every time a page has finished loading.

You'll also want to disable the urlclassifier anti-forgery tool, which can grow to a over 50MB sqlite database which also gets fsynced all the time...
Posted by Riku Voipio at 16:50