popcon lists approximately 1000 arm/armel Debian installations. There is also listed 864 installations of nslu2-utils, letting us estimate that approximately 85% of debian/arm(el) installations are Linksys nslu2's. It is nicked sympathetically as "The Slug", which pretty accurately describes the performance of nslu2. Still, people have found absolutely amazing amount of ways to use their slugs. What would you do with something approximately 10x more powerful with same prize/size range? 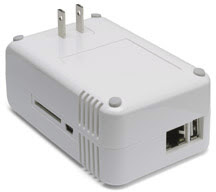 And that's not everything - SheevaPlug comes with SDIO slot and miniusb to be used as a serial console (and JTAG). No soldering needed for hacking.

Some more details on the LinuxDevices article.

For those of you who think that has one port too few of something, or don't like the wall-wart design, Other devices based on kirkwood SoC (which SheevaPlug is based on) are on the way from various ODM/OEM houses.
Posted by Riku Voipio at 20:03