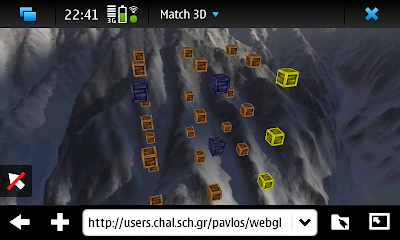 With the recent "PR1.2" firmware upgrade of Nokia N900, a new feature was enabled in the browser - WebGL. WebGL is cool and scary. The cool part is that it is a chance to bring lots of games to to Linux users. The screenshot is from Match3D, a 3D tic-tac-toe game.

The best way to get started is with the Learning webgl tutorial. Passing through the lessons, some are clearly featuring buggy graphics. I don't know if the website, N900 browser or the OpenGL ES driver is being buggy. Which brings the scary part of WebGL - not only does one need to deal with buggy browsers, one has to deal with buggy 3D hardware/drivers! WebGL is still very much work in progress, and on N900 the webGL is rather an "easter egg" than a proper feature. For example the 3D graphics from the GPU does an extra roundtrip via CPU before appearing on the screen.

Other WebGL resources are planet WebGL for following blogs about WebGL, the Khronos Demo repository and more demos can be found at CubicVR site. The last CubicVR demos feature another scary new browser feature (not yet supported on N900) - audio processing in JavaScript.
Posted by Riku Voipio at 16:38 5 comments: