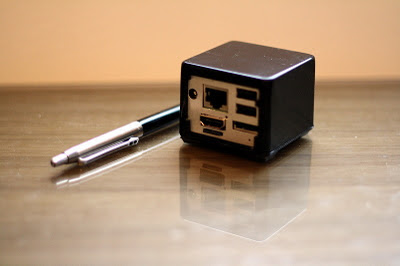 Just recently arrived from DHL, a solid-run CuBox. I guess nobody who knows me will be surprised when I tell it features an ARM cpu. Specifically an Marvell Armada 510. It features ARMv7 compatibility, with a slight twist of replacing NEON extensions with iWMMX extensions. On the boasting side Armada 510 promises 1080p video decoding and OpenGL ES graphics acceleration (closed source, unfortunately).


The tiny form factor of CuBox is pretty much more than the impressive amount of connectors included;

The last item being important as it makes CuBox unbrickable.. Some will probably lament the lack of WiFi/Bluetooth, but get everything in one device ;). Besides, the USB slots are there to be filled..


Getting started was an slightly rough ride, as in the included Ubuntu (10.04 LTS), X refused to start. After wrongly suspecting that my Display was at fault, turned out the microSD included was slightly corrupted, and some critical contents of xkb-data package were garbage. After reinstall of that package, everything worked, including playing Big Buck Bunny in FullHD with totem.


Biggest disappointment so far is the non-mainline kernel, based on old 2.6.32.9. Some mainline support of Armada 510 exist, but will it work with the proprietary graphics code?